Sous Vide is the most important thing to happen to my kitchen since the discovery of fire.

Originally, I only intended to use my vacuum sealer for food storage. That’s all I knew a vacuum sealer could be used for. While researching vacuum sealers I discovered so many more uses for a vacuum sealer than I ever initially thought of, and Sous Vide is by far my favorite of those discoveries.

Imagine food perfection. Having trouble? Think perfectly textured steak with the juices sealed in. Crisp or well-done vegetables, cooked exactly the way you want, every time. Fall-off-the-bone chicken without wasting a drop of marinade. Buttery potatoes au gratin – all done with no effort from the fridge to your plate, and without ever having to watch the pot. That’s what Sous Vide will do for you, and it will do it all without fail.

Sous Vide is french for “under vacuum”. Ah, See the connection as to why I’m telling you about this on a website about vacuum sealers? You vacuum seal your food raw (in most cases), then to cook it you place the packet into water that is highly temperature controlled. Generally, the water is not terribly hot and you leave the packet in the water for a longer period of time than you would typically cook for.

Since the water completely surrounds the packet on all sides it cooks completely evenly on all sides. Also, since you are cooking for a longer period of time, it can cook the item entirely and evenly through. In addition to all of the above, since your food is under vacuum it stays perfectly moist or perfectly dry. The vacuum eliminates any waiting for marinating and helps your flavors penetrate your food entirely. Once it is done cooking, open the bag and if what you cooked normally has a crisp outside toss it onto a hot grill or pan. You can even blowtorch it.

I know what you’re thinking…Sous Vide must be completely new, right?

Sous Vide has been around for a while, so you may be wondering why you’ve never heard of it before.

Amusingly, Sous Vide was discovered in 1799 by an American born British physicist and inventor named Sir Benjamin Thomas. It was pretty much only used in the 1960’s by American and French engineers for food preservation. Later in 1974 it was adapted and used in Restaurant Troisgros in France. It sperad from there. You likely haven’t heard of it because it wasn’t exactly accessible to the home cook, you’d mainly find the technique being used in commercial kitchens because the appliances that enabled you to do it were large and expensive. And ugly. But the restaurants knew that it was the perfect way to cook and keep people coming back for more. I want you to think about the best steak you have ever eaten in your entire life from a restaurant. Is your mouth watering yet thinking about it? Because It was very likely cooked Sous Vide! 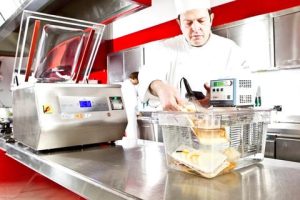 See? They are big and ugly. And expensive! I’m talking over a thousand dollars at least. Nope nope nope. Combine those factors with the cost of vacuum sealers in the past and it just didn’t make any sense to attempt to do at home.

that is no longer the case.

Only, in recent years Sous Vide has been able to make the jump from the commercial kitchen to the home kitchen. This is very much due to the reduction in cost and miniaturization of the technology in what we affectionately know as a precision cooker or circulator. They sort of look like stick blenders that you put into a pot or tub of water and it practically performs magic.

My favorite part is that nowadays these little precision cookers are connected to the internet. That means you can start and stop your meals cooking from anywhere you have an internet connection. I am assuming that you are likely a one of the 200 Million people in the USA alone who have a smartphone, so that means anywhere you get a signal.

There are three players in the connected Sous Vide at homeworld. 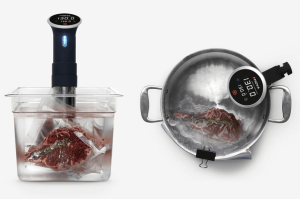 Currently the reigning King of the at home Sous Vide world is Anova. Their Precision cooker shown above comes with bluetooth and wifi connectivity. The app allows you to schedule cooks and monitor it in real time. It also has on board controls for redundancy. I like that.  The app is lacking recipes for now, but Anova has announced that they will be adding the feature soon. Currently, the Anova precision cooker is the only at connected Sous Vide at home device in stock! Click here to buy one before they too, are sold out! With over 1,400 reviews and a rating of 4.4 out of 5 Stars, it’s a given that they might sell out soon. 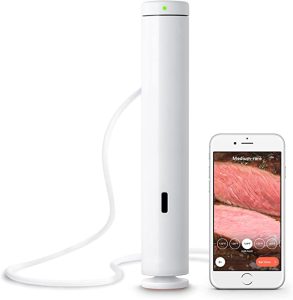 The Joule is durable and uses quality components. I like that the bottom is magnetized so it will stick to metal pots without having to be clipped. Since it doesn’t have a screen it is much smaller than the others! You simply control it with your smart phone. The app is really cool and you can choose recipes to cook from Chefsteps. Admittedly, it is a little bit daunting that if your phone bites it you can’t use the circulator (though I am sure others, like myself, have multiple Android and or iOS devices on which to use the app). Chefsteps is a good company, I trust them to do right by their customers. The Joule is so popular that, at the time that I first wrote this, they’d run out and had to make more.

Nomiku had its humble beginnings on Kickstarter, and they made a huge splash. Their first circulator wasn’t wifi connected, but they have released another version called the Nomiku Wifi. That too proved to be immensely popular and is currently sold out. 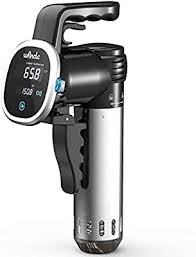 The Sous Vide home circulator space is becoming crowded and is quickly being flooded by cheap Chinese no-name circulators that I wouldn’t trust with my food. Ignoring the wacky and almost perverse brand name, The Wancle is an exception to that rule. At $109.99 (at the time of this writing) the price can’t be beaten for the features you get: Wi-Fi and Bluetooth connectivity as well as on-device controls. The fit and finish are tops on this Sous Vide cooker, it will definitely look good in your kitchen. I like the trigger clamp on the top of the device, it keeps your hands well away form the hot parts of the wand. The reviews are pouring in and are singing it’s praises. 4.5 out of 5 stars! For those of you who were playing the waiting game, you’ll definitely be rewarded here. I’m almost jealous that you’ll get such a good feature set for so little money. 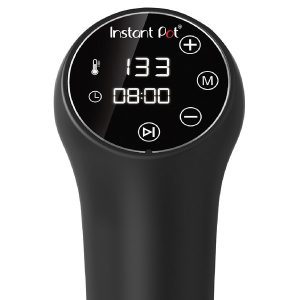 Fans of the Instant Pot pressure cooker know the overall quality of not only the company, who listens to their customers for feedback and iterates appropriately on the next design, but also on the product itself. This Sous Vide circulator lacks some of the fancier options like Bluetooth or Wifi, but it is a solid choice if you like simplicity or the Instant Pot brand.

Should you get one?

Yes! Absolutely, yes! Don’t even think twice about it. Buy it now, these devices are massively popular -so popular that the companies are scrambling to keep up with demand. They might sell out if you hesitate. I can’t blame them, they are amazing. If I haven’t convinced you to buy one with my zealous and borderline obsessive praise of the method and the devices then you must hate good food.

Vacuum Seal Food with spices and or marinade and oil. Place food in water bath at the final cooking temperature of the food, which avoids overcooking because the food cannot get hotter than the bath it is in. Go do something else while the food cooks, or allow it to cook while you are at work, etc. Open bag when you get back then do a quick sear to finish on hot surface like grill or skillet, or with a torch. Take a bite and be amazed at how good it is with so little effort.

After you have a Vacuum Sealer and A Sous Vide device and a pot, you’re pretty much all set. There are other accessories out there that you can spoil yourself with for not a lot of money that can make the process easier and more fun. 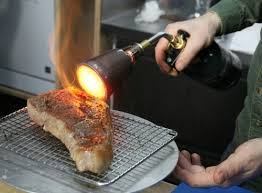 My favorite accessory is the Searzall torch head attachment. Why? Because of fire. That’s why! What isn’t fun to cook with a torch? On a more serious note, using a torch does allow you to see exactly how your food is coming along while you finish it. It definitely gives you greater control than tossing it onto a grill, under a broiler, or on a pan. If you don’t already have a trigger start torch and a propane cylinder you’ll need to get those as well. 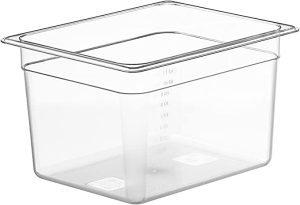 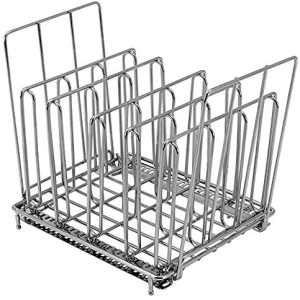 If you are preparing multiple items in the same water bath you can either clip the bags to the side of the container to make sure they get even circulation or you can use a rack. The rack helps to ensure even spacing in the bath and that each bag gets prime circulation and thus even heating. 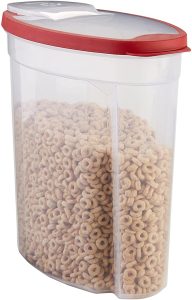 For smaller cooks this container is perfect! The round hole in the lid is a perfect fit for a Sous Vide circulator. It’s nice and cheap too, pick one up here.

But what about Botulism?

It’s nothing to worry about if you aren’t careless! This is also why being able to schedule your cooks comes in handy. In the earlier days of Sous Vide it was more of a potential problem, but decidedly less so these days. But I will still tell you about it, because it is important to be an informed consumer.

The key facts about Sous Vide and Botulism:

By the way, this is another selling point for the Anova Precision Cooker. If the water temperature rises above 40° before your scheduled cook time,  the Auto-Cook feature will trigger your cook to keep it safe.

Hi All! My name is Stuart. It all started because I wanted one…I wanted a vacuum sealer. I hated throwing away food. It made me feel guilty, and that I was just throwing money into the garbage can needlessly. So I decided to share my knowledge with everyone. I hope my research helps your decision easy. 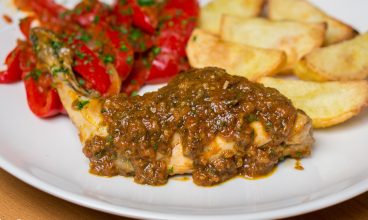 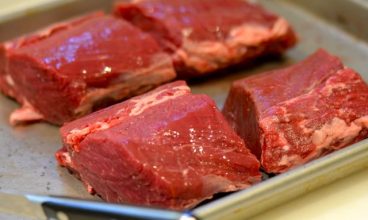